Why people die in novels: Testing the ordeal simulation hypothesis 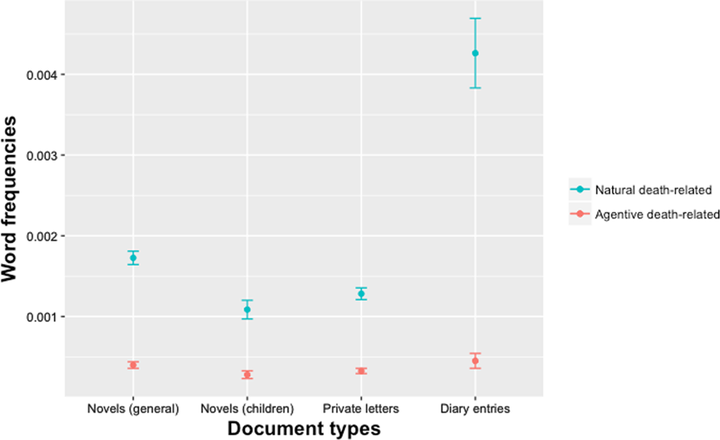 What is fiction about, and what is it good for? An influential family of theories sees fiction as rooted in adaptive simulation mechanisms. In this view, our propensity to create and enjoy narrative fictions was selected and maintained due to the training that we get from mentally simulating situations relevant to our survival and reproduction. We put forward and test a precise version of this claim, the “ordeal simulation hypothesis”. It states that fictional narrative primarily simulates “ordeals”: situations where a person’s reaction might dramatically improve or decrease her fitness, such as deadly aggressions, or decisions on long-term matrimonial commitments. Experience does not prepare us well for these rare, high-stakes occasions, in contrast with situations that are just as fitness-relevant but more frequent (e.g., exposure to pathogens). We study mortality in fictional and non-fictional texts as a partial test for this view. Based on an analysis of 744 extensive summaries of twentieth century American novels of various genres, we show that the odds of dying (in a given year) are vastly exaggerated in fiction compared to reality, but specifically more exaggerated for homicides as compared to suicides, accidents, war-related, or natural deaths. This evidence supports the ordeal simulation hypothesis but is also compatible with other accounts. For a more specific test, we look for indications that this focus on death, and in particular on death caused by an agent, is specific to narrative fiction as distinct from other verbal productions. In a comparison of 10,810 private letters and personal diary entries written by American women, with a set of 811 novels (also written by American women), we measure the occurrence of words related to natural death or agentive death. Private letters and diaries are as likely, or more likely, to use words relating to natural or agentive death. Novels written for an adult audience contain more words relating to natural deaths than do letters (though not diary entries), but this is not true for agentive death. Violent death, in spite of its clear appeal for fiction, does not necessarily provide a clear demarcation point between fictional and non-fictional content.

I wrote a presentation of the research behind the paper in this blog post.