Copy-the-majority of instances or individuals? Two approaches to the majority and their consequences for conformist decision-making 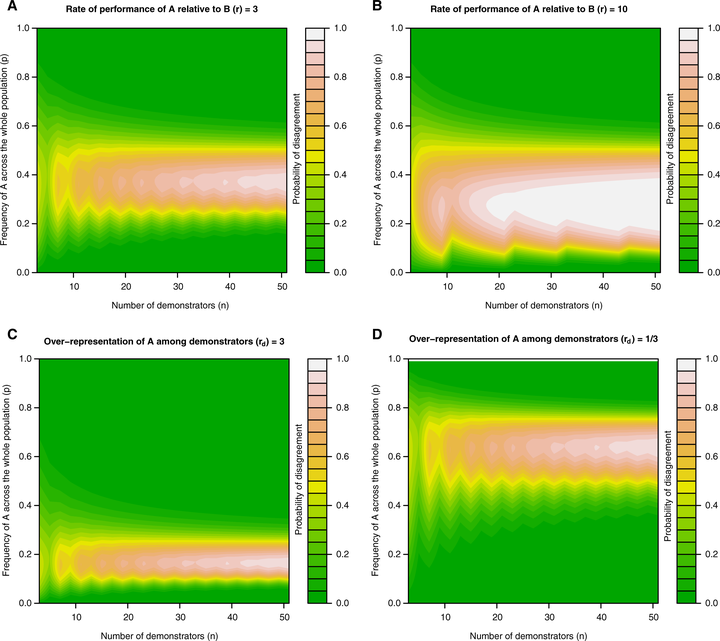 Cultural evolution is the product of the psychological mechanisms that underlie individual decision making. One commonly studied learning mechanism is a disproportionate preference for majority opinions, known as conformist transmission. While most theoretical and experimental work approaches the majority in terms of the number of individuals that perform a behaviour or hold a belief, some recent experimental studies approach the majority in terms of the number of instances a behaviour is performed. Here, we use a mathematical model to show that disagreement between these two notions of the majority can arise when behavioural variants are performed at different rates, with different salience or in different contexts (variant overrepresentation) and when a subset of the population act as demonstrators to the whole population (model biases). We also show that because conformist transmission changes the distribution of behaviours in a population, how observers approach the majority can cause populations to diverge, and that this can happen even when the two approaches to the majority agree with regards to which behaviour is in the majority. We discuss these results in light of existing findings, ranging from political extremism on twitter to studies of animal foraging behaviour. We conclude that the factors we considered (variant overrepresentation and model biases) are plausibly widespread. As such, it is important to understand how individuals approach the majority in order to understand the effects of majority influence in cultural evolution.