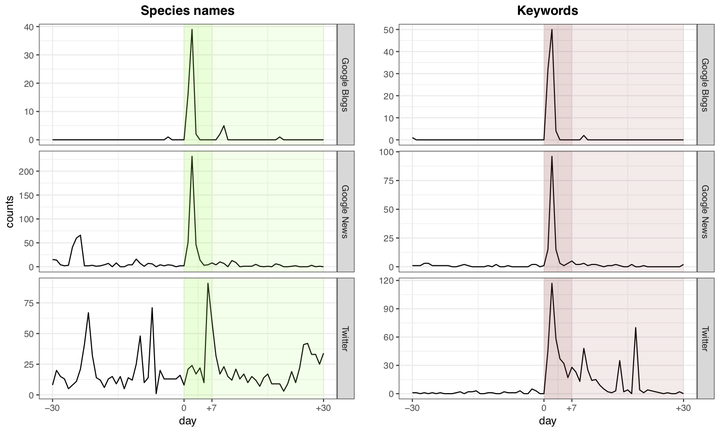 Assessing the impact of conservation campaigns is of high importance for optimizing the use of limited resources. Lists of threatened species are often used as media outreach tools, but their usefulness is rarely tested. We investigated whether the inclusion of a species in the list “World’s 25 Most Endangered Primates”, published biannually by the International Primatological Society, the International Union for Conservation of Nature’s Species Survival Commission Primate Specialist Group, and Conservation International from 2000, had an effect both on scientific publications and on the general public. We analyzed a database of 40 million articles from major scientific publishers (Elsevier, Springer, Nature, Plos, Pubmed, Biomed Central) finding an increase in the number of papers mentioning a species after its inclusion in the list. We also analyzed media penetration (data from Google News), and online interest (data from Google Blogs, Twitter, and Google Trends), collecting daily data for one month before and one after the official launch of the 2014-2016 list (24th November 2015). The results show a short spike of interest on Google News and Twitter but no long term effect, indicating a limited effect on the general public. Our results are important for the understanding of the impact of current conservation campaigns and to provide strategies for future campaigns.