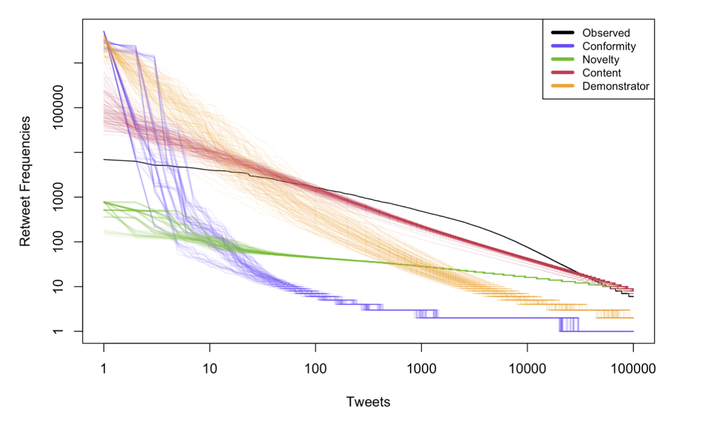 During the 2020 US presidential election, conspiracy theories about large-scale voter fraud were widely circulated on social media platforms. Given their scale, persistence, and impact, it is critically important to understand the mechanisms that caused these theories to spread so rapidly. The aim of this study was to investigate whether retweet frequencies among proponents of voter fraud conspiracy theories on Twitter during the 2020 US election are consistent with frequency bias, demonstrator bias, and/or content bias. To do this, we conducted generative inference using an agent-based model of cultural transmission on Twitter and the VoterFraud2020 dataset. The results show that the observed retweet distribution is consistent with a strong content bias and demonstrator bias, likely targeted towards negative emotion and follower count, respectively. Based on the confounding effects of the timeline algorithm and population structure, we are most confident in concluding that the differential spread of voter fraud claims among proponents of voter fraud conspiracy theories on Twitter during and after the 2020 US election was partly driven by a content bias causing users to preferentially retweet tweets with more negative emotion.